Pension is here. Even if it sometimes seems far away.

The Social Insurance Bank pays AOW to almost 3.5 million people every year. The AOW is the basic pension of the government, which can be supplemented by pension accrued with an employer or by saving yourself. However, most people are only aware of their retirement at the end of their career. Previously, people often cannot imagine the future, the changing society, and therefore also not of their financial well-being in the future. This creates a lack of urgency and perspective for action in the here and now, and a complex issue where different stakeholders have to work together to find solutions. Over the past year, Novum has therefore cooperated in the process Making pension tangible. With a consortium of partners, we worked on making pensions tangible and tangible, and on linking the actions of today to the needs of the future. In this blog we take you through the approach, the different phases, and the results of the process.

How can we make pensions tangible from the individual experience of people?

Leaving aside the social importance of the research question, the proposed approach by initiators musus, motivation and Think+DO a big reason for Novum to contribute to the project. As an innovation lab, we are a strong advocate of design thinking and multidisciplinary working to arrive at appropriate and supported solutions. Making Pensioen Tangible was an excellent opportunity to tackle a complex issue with all stakeholders within the pension sector. With the consortium consisting of creative parties, pension funds, insurers, and government, we deepened, explored and renewed in three steps, with the aim of developing a solution that matches the motivations, needs and behavior of users.

In the first phase, the drivers, motivations and needs of Dutch people with regard to financial well-being were mapped out for later. Through the intervention 'The Confession of the Future' street interviews were conducted, which were supplemented with context factors supplied by the consortium partners. These are factors that have an influence on the issue from society now or in the future, such as trends, developments, circumstances and principles.

In the second phase, the insights from Phase I were clustered and converted to ten 'Driving Force'. These Driving Forces describe the movements that are taking place within society and that influence the future of financial well-being for later. In a co-creation workshop, the initial set-up of the Driving Forces was supplemented and refined with the help of the expertise of the consortium partners. Based on the Driving Forces are then four worlds set up in a framework. Each quadrant in the framework represents a possible future world of financial well-being for the future: 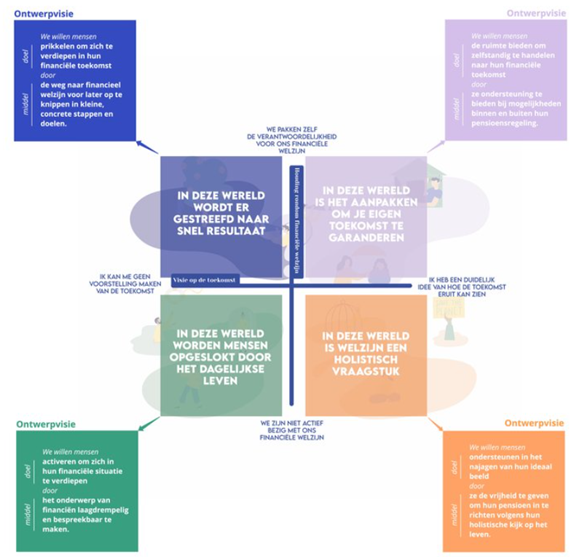 Design visions were then drawn up on the basis of the four worlds. Each world has its own design vision, which states the purpose of the design and which means we use to realize it. These design visions provide guidance and clarity when we start thinking about solutions at a later stage. Together with the consortium partners, it was decided to focus on the world at the bottom left in which people are absorbed by everyday life. The vision that goes with this is: We want to activate people to delve into their financial situation by making the subject of finance accessible and open to discussion. Because different target groups can also be distinguished within this world at the bottom left, it was decided to emphasize young people and starters on the labor market; a group of which the consortium partners indicated that they are difficult to reach and activate through the traditional means and channels of communication.

In the third phase, three possible options were identified based on the chosen world and associated design vision solution directions identified. During the opportunities workshop, ideas were created on the basis of these possible solutions, together with the consortium partners. Six ideas were subsequently developed by Muzus, Motivaction, and Think+DO into concrete concept ideas. These concepts were subsequently assessed by 328 working Dutch people between the ages of 18 and 50 and by the consortium partners. From this the idea of 'Personal financial development' came out the best; a teaching package offered by the employer, consisting of different modules on topics that influence your financial well-being in the future.

Concept the day after tomorrow

Based on the results of the research into the six concept ideas, a first prototype of the platform has been developed The day after tomorrow developed. The day after tomorrow provides young people and starters on the labor market with an interactive insight into the financial consequences of today's life choices. This includes working part-time, job hopping, taking unpaid leave, but also buying a house or having children.

The day after tomorrow can be offered as a platform by employers, in order to support their employees with such issues. However, do employers want this? Do they see value in such a platform? A first qualitative research of Motivaction among employers and HR employees showed that this is the case: two thirds of the participants scored the concept with a 7 or higher.

A unique method, a great result, what now?

On 24 August we organized an internal knowledge session together with Muzus to share the working method and results of the project with colleagues from the SVB. A diverse group, consisting of other participants from services, HR, and communication, came together and each gained inspiration and knowledge from their own discipline, and shared their vision of the final concept. HR indicated that such a platform could be an interesting way to activate employees to concern themselves with their financial well-being and pension, and that the concept fits in with the modern image of good employership.

The digital final meeting of the project with all consortium partners also took place on 26 August. In addition to toasting to the good cooperation and the result, looking ahead was also central here. After all, we have worked together for a year and there is a great concept on the shelf, how do we proceed with this as (members of) the consortium? An important insight here was the distinctiveness of the current prototype is not (yet) large enough compared to existing platforms such as www.nuietsdoenaanjepensioen.nl. A few consortium partners, including Novum, have indicated that they would like to think further about the concept, with or without potentially interested parties from outside the consortium.

All in all, we look back on an instructive trajectory, and we will certainly include the lessons relating to the working method, the collaboration with the consortium, and the subject of Making Pension Tangible in future projects!