Research into digital authorization in collaboration with Fontys Hogeschool

In most cases, transactions will simply be executed by two parties. But there are also situations where a digital transaction must be carried out on behalf of someone else.
Consider, for example, a situation where a child of a parent with dementia wants to report a move of the parent online to a municipality. In this situation, you want the child to be authorized to make this transaction on behalf of the parent.

As an implementer of social legislation, the SVB pays out 45 billion euros annually to 5.5 million customers. 62% from our customers receive AOW from us. The AOWs are a basic pension for people with the AOW age of 67 and older.

The AOW target group will grow in the coming years and at the same time also become more digitally skilled. This means that when this target group can no longer do the administration itself, other people must be able to take over. For this it is necessary that you can authorize someone digitally.
Within the government, a lot of research has already been done from a legal and technological perspective into digital authorization. As an innovation lab of the SVB, Novum wants to gain insight into the user perspective of digital authorization in order to be prepared for the future.

For this project, Novum collaborated with a team of students from the Digital Experience Design course at Fontys University of Applied Sciences. They were commissioned to use a Human-centered design approach to develop a prototype with which a pensioner can authorize someone to arrange online affairs with the government on his or her behalf. It had to be a digital solution and the focus was on the design of the solution and not the underlying technology.

The Approach and Results

The students followed a Design Thinking approach and delivered different results per stat.

During the empathize phase, the students interviewed 12 people from the target group and sent a questionnaire and received 13 responses. The main insights from this research were:

Based on the insights from the interviews and the questionnaire, the team made the following point of view. A point of view is a concise summary of the problem to be solved, described from the end user's perspective.

Using the point of view, the team held several brainstorms in which different solutions were sought. Ultimately, it was decided to further develop two solutions from the brainstorm into a prototype. A step interface where a user is guided step by step through the process. And a conversational interface people can jointly reach an authorization in a chat conversation.

The team developed two concepts into prototypes and tested them with the target group. Based on the feedback, the prototypes were adapted and improved. 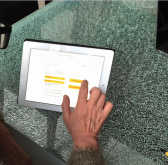 The step interface is a concept in which the user is guided through the authorization process in small steps. In the first version of this prototype, the user was first extensively informed. Tests showed that the user was not waiting for a lot of information in advance, but mainly wanted to get started with arranging the authorization. That is why it was decided to provide more information in the process instead of beforehand.

Both concepts require even more research and elaboration. Novum has chosen to collaborate with Program People Central and a new team of students from Fontys University of Applied Sciences to conduct further research into the conversational user interface. An important issue here is whether the work of the coach could be partially taken over by a robot. Another issue is the level of detail at which users want to give authorization.

If you want to know more about this project or about the follow-up, please contact us.

← Themes 2021 How can we reduce the non-use of schemes? Experiment with Secure Multi Party Computation →
Share this article